Boards of Directors and Advisors Strengthened

The acquired permits were selected based on their proximity to wells recording lithium brine levels between 72 and 130mg/l from the Leduc Carbonate Reef complex Woodbend Group and the underlying Beaverhill Lake Group rock. The aquifers in these units historically have been known to host the highest grades of lithium-in-brine in Alberta. The Indigo permits are in the Fox Creek, Leduc and Grande Prairie areas. There are over 400 wells that have been drilling on the Indigo permit areas. 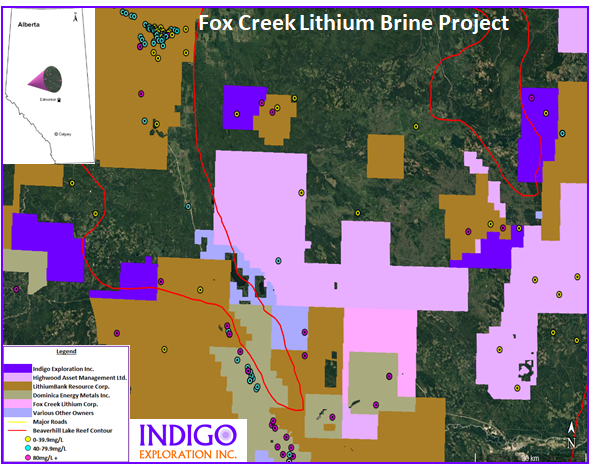 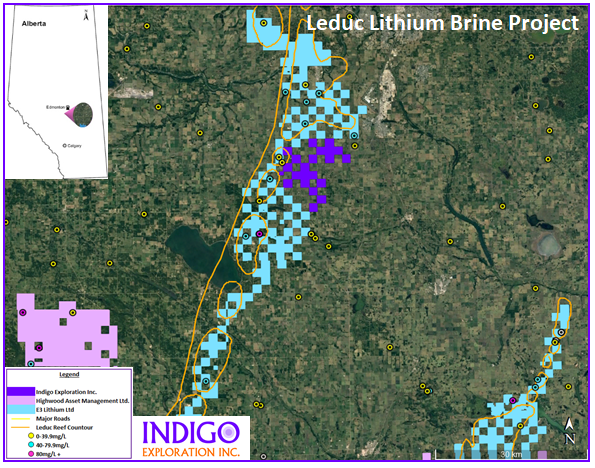 Accordingly, the Company is strengthening its Board of Directors and Board of Advisors with technical professionals who are qualified and experienced to facilitate and advance the Company’s new focus and target type. Mr. Tom Henricksen will step down as VP Exploration and remains as a director of the Company.

Mr. Bradley Parkes has joined the Board of Directors and will become interim VP Exploration. Mr. Parkes has a BA in Economics and BSc in Petroleum Geology (BSc) from the University of Calgary and a Master’s degree in Energy Law from the College of Law at the University of Tulsa. Mr. Parkes is a Professional Geologist registered with APEGA and Engineers and Geoscientists of BC. He also a fellow of the Canadian Securities Institute (FCSI). Mr. Parkes spent the first decade of his career as a stockbroker and an associate in the Corporate Finance department at a national Canadian brokerage firm. Mr. Parkes was licensed with IIROC in both Alberta and BC to advise and trade equities, futures and options and assisted in raising over $100 million for early-stage resource companies. Following his time in the investment industry, Mr. Parkes has been involved in the hydrogeological, mineral and oil and gas exploration and development subsectors of the resource exploration industry. Mr. Parkes has extensive experience in oil and gas exploration being involved with the drilling of over 125 oil and gas wells.

Dr. David Dreisinger and Dr. Gary Kordosky, both accomplished metallurgists and holders of multiple patents on mineral extraction have joined the Company’s Board of Advisors. Drs. Dreisinger and Kordosky experienced in lithium will be advising the company on selection of Direct Lithium Extraction (DLE) technology.

Dr. David Dreisinger is a Professor and Chairholder of the Hydrometallurgy Chair at the University of British Columbia and works closely with industry to develop technical solutions to the treatment of ores and concentrates for metals recovery. Dr. Dreisinger has published over 300 technical papers in journals and conference proceedings and is co-inventor holding 24 US patents on a variety of metals extraction, separation and recovery flowsheets.

Dr. Gary Kordosky is a world-renowned expert in Solvent Extraction. He holds an MS in Organic Chemistry and a PhD in Inorganic Chemistry, from The Ohio State University. His experience includes development and evaluation of metal recovery reagents, metal recovery process development and process evaluation, technical service, marketing and plant troubleshooting and he has been a member of part plant start-up teams for SX plants in the United States, Chile, Peru, Australia and Zambia. Dr. Kordosky is an inventor on 21 US patents and has authored more than 40 papers. He was awarded the 1989 Fritz Henkel Innovation Award, the 2007 Cognis Innovation Award, the 2013 Milton Wadsworth Award for his various metallurgical accomplishments.

The revamped Company website reflecting these Company changes will soon be available.

Global wave of demand for lithium is accelerating with the need for energy storage solutions, particularly for the electric vehicle industry. The demand for electric vehicles which require a significant amount of lithium is creating such a large market that lithium supply shortages are forecasted even this decade. This growing demand provides an opportunity for Alberta with its mature oil fields which also hold large deposits of lithium in subsurface brine. Considered an industrial waste from oil field operations, new technologies are being developed to tap into and extract Alberta’s lithium-brine potential from many of the same oil and gas reservoirs. These recent technological advancements position Alberta to potentially become a major lithium producer. Couple this with the abundance of existing geological data and infrastructure to access these reservoirs and a highly trained workforce, Alberta can capitalize on its lithium production potential.

In further news, the renewal of the Djimbala permit in Mali was not made since no justifiable exploration opportunities remained after the expenditures made. As such, the permit has been returned to the ministry of mines and Indigo has terminated its option agreement dated April 9, 2020 with Desert Gold Ventures.

On Behalf of the Board of Directors,

Bradley Parkes, P.Geo., Interim VP Exploration and Director of Indigo Exploration Inc., is the Qualified Person as defined in National Instrument 43-101, who has read and approved the technical content of this news release.