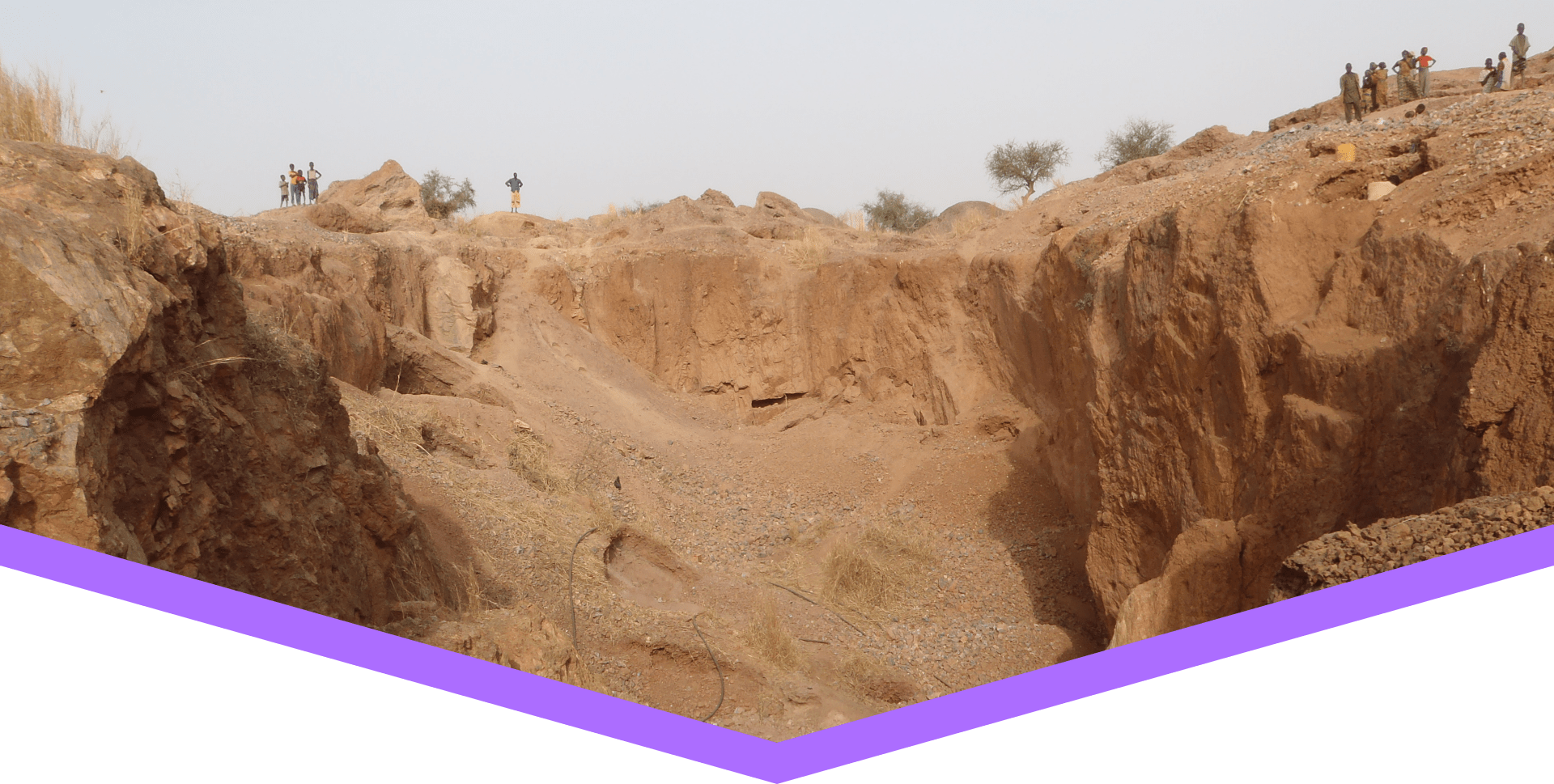 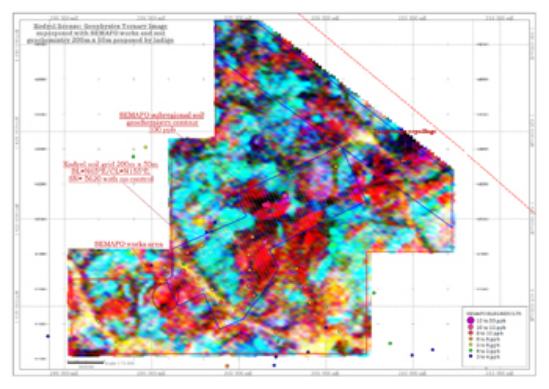 Kodyel Radiometric Survey (red indicates a radiometric anomaly). The blue box shows the extent of the new soil grid over the BLEG anomaly. The colour dots are the anomalous BLEG sample sites. The SEMAFO (Hantekoura) and Tangounga artisanal sites are locatedon figure.

The Hantoukoura permit covers 238 square kilometres and lies close to the Niger border approximately 300km east of Ouagadougou. Access is by paved road as far as Fada N’gourma about 200km east of Ouagadougou and thence by laterite roads. The Hantoukoura permit covers an extension of the Fada N’Gourma greenstone belt that continues into Niger. The Hantoukoura permit is traversed by a regional northeast-trending fault that stretches from Ghana to Niger and separates the mafic and felsic volcanics and metasedimentary rocks of the Fada belt from the migmatites and granites to the northwest. There are several active artisanal workings within the permit, including: Hantekoura (CFA), Kodyel 1, and Tangounga.

The Tangounga artisanal workings site hosts multiple massive quartz veins each 1-10 metres wide outcropping over more than a 400 metres strike length. Local miners have been working to a depth of over 30 metres in an artisanal working now 250 metres long by 40 metres wide. Very limited sampling has been done by Indigo, however, highlights of grab samples of quartz from artisanal gold mining sites on veining, and alteration within intermediate tuffs and highly altered, sheared and kaolinized felsic volcanics include 7 gpt Au and 9 gpt Au. Quartz float is observed both northeast and southwest of the pit.

The Hantekoura (CFA) artisanal workings consists of a series of pits and cuts oriented at 060o over 550 metres strike length. Mineralization consists of quartz veins, 5 – 25 centimetres thick, hosted in intermediate tuffs near the granite contact. Hantekoura (CFA) was explored by SEMAFO from 1996 to 1998. They completed 9 trenches and 13,529 metres of drilling largely of vertical Rotary Air Blast (or RAB) holes at 25 metre centres and 26 angled RC holes into the zone of quartz stockwork, defining a mineralized zone 625 metres long, 50 to 100 metres wide and 70 metres deep with grades reported in excess of 1 gpt Au. They followed with 1597 metres of diamond drilling in 12 holes in 1997. The best intercept was 43m grading 4.3 gpt Au. SEMAFO calculated a historic preliminary resource of 753,000 tonnes grading 3.1 g/t Au. The estimate, made in 1998 prior to the adoption of NI 43-101, is not compliant with NI 43-101 guidelines and should not be relied upon. Indigo has revisited the data to model at a lower cut-off.

The Kodyel 1 artisanal site consists of a large cut 70 metres long and up to 40 metres wide, exploiting strongly kaolinitized and sheared rocks hosting white and rose quartz veins in a zone striking to the northeast and dipping to the northwest and southeast. Kodyel 1 was explored by SEMAFO from 1996 to 1998. An anomaly to the northeast of CFA site was identified and further RAB drilling was proposed. No further work on the CFA Prospect is noted.

The northeast trending geology continues into Niger (off of Hantoukoura). The large Songonduari artisanal, working where up to 10,000 people have been working, lies at the previously positioned border which has recently been resolved by the World Court.

The Company conducted an airborne magnetic and radiometric survey in February 2011 and a limited sampling program in March. Large areas of radiometric anomalies suggestive of hydrothermal alteration are seen from the airborne data. (Shown in first figure).

Indigo has completed a 48 square kilometres soil grid over the 15 kilometre stretch of favourable geology and artisanal workings between the Tangounga pit and the CFA Zone drilled by Semafo in 1997. Results from 65% of the grid were reported August 15, 2012. Results from the remaining 35% of the grid are now available and improve on the anomalies. Collectively, the 2012 and 2013 soil results demonstrate multiple gold soil anomalies (see figure below). The most significant anomaly measures 5.5 kilometres long by 600 metres wide with values generally greater than 50 ppb Au, corresponding to an interpreted regional right lateral fault. The east end of this soil anomaly lies 2.5 kilometres short of the Tangounga pit. To date, no soil sampling has been done in this 2.5 kilometre gap, nor in the Tangouonga pit area. Another significant gold anomaly is 1.5 kilometres long by 1 kilometre wide and corresponds with an interpreted structural dilation zone related to the regional right lateral fault. During the soil sampling program, geologists also mapped numerous artisanal workings and zones of substantial quartz float strung along a 15 kilometre stretch overlying the interpreted regional right lateral fault. The gold soil anomalies to date constitute strong drill targets and confirm the sizeable potential of its flagship project. 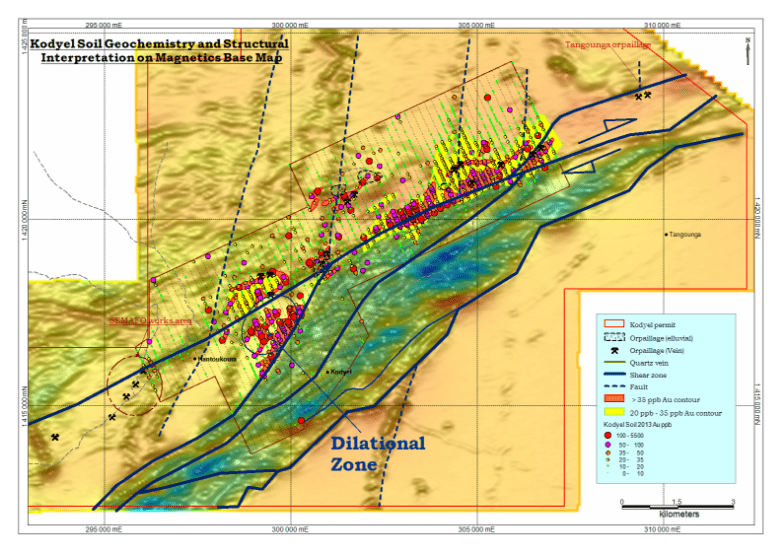